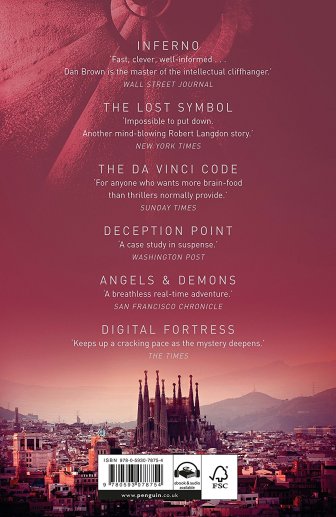 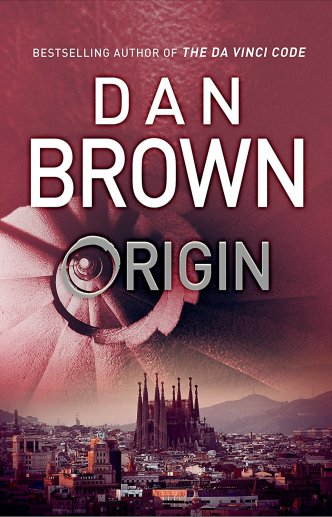 The spellbinding new Robert Langdon novel from the author of The Da Vinci Code.

Robert Langdon, Harvard professor of symbology and religious iconology, arrives at the Guggenheim Museum Bilbao to attend the unveiling of a discovery that “will change the face of science forever”. The evening’s host is his friend and former student, Edmond Kirsch, a forty-year-old tech magnate whose dazzling inventions and audacious predictions have made him a controversial figure around the world. This evening is to be no exception: he claims he will reveal an astonishing scientific breakthrough to challenge the fundamentals of human existence.

But Langdon and several hundred other guests are left reeling when the meticulously orchestrated evening is blown apart before Kirsch’s precious discovery can be revealed. With his life under threat, Langdon is forced into a desperate bid to escape, along with the museum’s director, Ambra Vidal. Together they flee to Barcelona on a perilous quest to locate a cryptic password that will unlock Kirsch’s secret.

In order to evade a tormented enemy who is one step ahead of them at every turn, Langdon and Vidal must navigate labyrinthine passageways of hidden history and ancient religion. On a trail marked only by enigmatic symbols and elusive modern art, Langdon and Vidal uncover the clues that will bring them face-to-face with a world-shaking truth that has remained buried – until now.

“Fans will not be disappointed” (The Times)

“Read this if you like high stakes drama” ( Evening Standard)

” Origin is an imaginative and rattling good tale, the science is accurate and comprehensible and the information on the historic buildings featured are fascinating” ( Irish Independent)

Dan Brown is the bestselling author of Digital Fortress, Deception Point, Angels and Demons, The Da Vinci Code, The Lost Symbol and most recently, Inferno. Three of his Robert Langdon novels have been adapted for the screen by Ron Howard, starring Tom Hanks. They have all been international blockbusters.
His new Robert Langdon novel, Origin will be out in Autumn 2017.
Dan Brown is a graduate of Amherst College and Phillips Exeter Academy, where he has taught English and Creative Writing. He lives in New England.